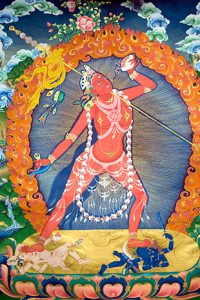 Today I’m working on a second draft of a story about a librarian who catalogs the lives of Tibetan saints and spends his off-work hours at a dive bar. At the bar he meets a woman he initially finds repulsive, but then warms to.

That part of the story was partly inspired by a classic story by Russell Banks, “Sarah Cole: A Kind of Love Story,” about an extremely handsome, privileged man who takes up with a very ugly, working-class woman. The crux of the story is about how the man, who narrates the tale, is either blind to or simply unwilling to acknowledge the differences in power between him and his lover.

In my story, the protagonist experiences visions connected to the religion he studies, Tibetan Buddhism. More specifically, he sees hungry ghosts and wisdom deities. I’ve been doing my homework on these beings and found a terrific source on the latter in Judith Simmer-Brown’s book Dakini’s Warm Breath: The Feminine Principle in Tibetan Buddhism.

The image of the dakini, or sky-dancer, plays a major role in my story and is described by Simmer-Brown in this way:

Dakinis were [originally] demonic inhabitors of cemeteries and charnel grounds, delighting in the taste of human flesh and blood and dancing with ornaments fashioned from the bones of decaying corpses … They were wrath personified, joining the slaughter on the battlefield, intoxicated from thirstily sucking the blood of their victims.

At least that’s how they were originally understood in India before the seventh century C.E. Later, these terrifying embodiments of feminine power become something else in entirely within the context of Tibetan Buddhism. In that tradition, a dakini (khandroma in Tibetan) can be a creature of great wisdom and spiritual achievement:

The wisdom dakini is fully awakened and acts to awaken others. She is the essence of enlightened mind beyond any concept of gender, the preeminent symbol of the nature of mind itself, in female form … she is the supreme protector of the teachings, a tantric guru, a female buddha with her glorious retinue. The yeshe khandro [wisdom sky-dancer] is the manifestation of wisdom par excellence, the unblinking penetrating gaze that sees phenomena just as they are.

Well, it’s back to drafting for me, which today involves figuring out how my protagonist’s vision of a sky-dancer can illuminate the story’s themes.