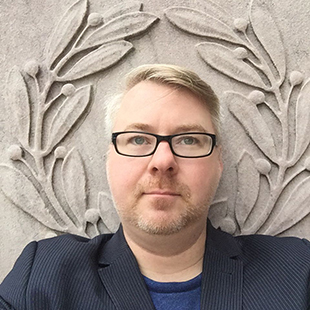 Thomas Dodson is an assistant professor and librarian at Southern Oregon University.  His story collection, No Use Pretending, was selected by Gish Jen for the Iowa Short Fiction Prize and is forthcoming from University of Iowa Press.

His fiction has appeared in The Missouri Review, Gulf Coast, The Cincinnati Review, and elsewhere. His short stories have been awarded the 2022 Robert and Adele Shiff Award and the 2020 Jeffrey E. Smith Editors’ Prize. His story “Keeping” was selected by the editors of Best American Short Stories as a distinguished story of 2022. He has been a finalist for the 2022 Autumn House Fiction Contest, the wicw Fiction Fellowship, the Glimmer Train Award for New Writers, and the Hamlin Garland Award for the Short Story.

Founding editor of the journal Printer’s Devil Review, Thomas served as its editor and designer for five years. He was also the executive editor of the Best Indie Lit New England series.

Thomas grew up in a small town in northeast Missouri, where he spent most of his time reading comic books, playing Dungeons and Dragons, and learning martial arts from a badass farmer. He studied poetry and East Asian art in college, then got a graduate degree in comparative cultural studies, and then another in something called “library science.”

He has set up tutoring programs in New Orleans; studied in China; taught courses on writing, critical theory, and popular culture; hosted a podcast; designed websites for the Harvard Library and Boston University; and been an advocate for open access to scholarly literature. These days, he spends entirely too much time playing perversely complicated PC games that simulate past historical periods (and sometimes outer space). He lives in Ashland, Oregon, by the grace of the hoofed ruminant mammals that are its rightful overlords.

Don’t even get him started about typography, continental philosophy, or climate fiction.